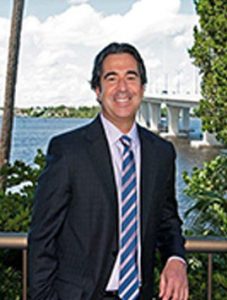 President of Campo Financial Services is a life-long resident of Martin County, Florida.

James launched Campo Insurance Agency in 1983.  The firm based in Sewall’s Point offers personal and commercial insurance and investment services.

James graduated from Florida Atlantic University where he received his Bachelor of Arts in Political Science with an emphasis in taxation and economics.  Postgraduate, James completed his Certified Financial Planner coursework at Florida Institute of Technology.

He holds FINRA securities registrations 7, 6, and 63 and is licensed for Property and Casualty Insurance (2-20) and Life and Health Insurance (2-18).  James is a registered representative and an investment advisor representative affiliated with Cetera Advisors broker-dealer.

As an active leader on the Treasure Coast, James served as President of the following organizations: Treasure Coast Planned Giving Council, the Martin County Young Republicans, the Martin County Exchange Club, the Independent Agent Association, the Treasure Coast Association of Fundraising Professionals, and as Chairman of the Redeemer Lutheran School Board.  He was honored with an award from Northwood University for Promotion of Philanthropy.  In 2005, the Florida Association of Public Relations crowned him their “Communicator of the year”.

In 2014, he chose to serve his community and was elected to the Sewall’s Point Town Commission. Since then, he served as the town’s vice mayor and mayor.  In 2016, he was elected county wide as the Republican Party’s State Committeeman with over 72% of the vote.

James has 5 children and lives in Sewall’s Point.